Demystifying SDS-PAGE: The science behind all those bubbles.

Have you ever wondered exactly what is happening in an SDS-PAGE system when you turn on the power source and the wires started bubbling?

You are not alone! Here are the answers to the science behind all those different pHs and gel layers.

What exactly is SDS-PAGE?

It is an acronym for Sodium Dodecyl Sulfate–Polyacrylamide Gel Electrophoresis.
SDS is a detergent, an anionic (negatively charged) surfactant (compound that lowers surface tension). In the case of proteins, SDS disrupts the non-covalent bonds in protein molecules.
PAGE is a biochemical technique that allows for proteins to be separated by their electrophorectic mobility (how fast they move in an electric field). In the case of SDS-PAGE, they are separated by their size (molar mass), and not their charge.

What causes the movement of the molecules through the gel? 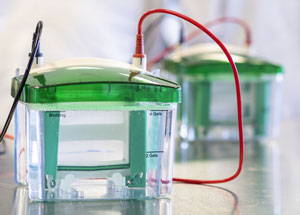 An electric current. When you put the lid on your gel box and turn on the current, the negatively charged proteins will try to move through the gel towards the positively charged anode. The cathode and anode are the wires in your tank that are bubbling once you turn on the system.

What causes all those bubbles?

Application of SDS to proteins causes them to lose their higher order structures and become linear.

The Chemical Ingredients and What they Do

What exactly does SDS do?
It unfolds proteins. Application of SDS to proteins causes them to lose their higher order structures and become linear. Since SDS is anionic (negatively charged), it binds to all the positive charges on a protein, effectively coating the protein in negative charge.

Why do we want the protein coated in negative charges?
To remove charge as a factor in protein migration through the gel. SDS binds to proteins with high affinity and in high concentrations. This results in all proteins (regardless of size) having a similar net negative charge and a similar charge-to-mass ratio. In this way, when they start moving through a gel, the speed that they move will be dependent on their size, and not their charge.

After getting hit with SDS, is a protein’s size the only thing that affects its migration through the gel?
It is by far the biggest factor. However, SDS can bind differently to different proteins. Hydrophobic proteins may bind more SDS, and proteins with post-translational modifications such as phosphorylation and glycosylation may bind less SDS. These effects are usually negligible, but not always, and should be considered if your protein is running at a different molecular weight than expected.

What is in the running buffer?
Tris, glycine, and SDS, pH 8.3. Tris is the buffer used for most SDS-PAGE. Its pKa of 8.1 makes it an excellent buffer in the 7-9 pH range. This makes it a good choice for most biological systems. SDS in the buffer helps keep the proteins linear. Glycine is an amino acid whose charge state plays a big role in the stacking gel. More on that in a bit.

What is in the sample loading buffer?
Tris-HCl, SDS, glycerol, beta mercaptoethanol (BME), Bromophenol Blue. This is the buffer you mix with your protein samples prior to loading the gel. Again with the Tris buffer and its pKa. The SDS denatures and linearizes the proteins, coating them in negative charge. BME breaks up disulfide bonds in the proteins to help them enter the gel. Glycerol adds density to the sample, helping it drop to the bottom of the loading wells and to keep it from diffusing out of the well while the rest of the gel is loaded. Bromophenol Blue is a dye that helps visualization of the samples in the wells and their movement through the gel. Sample loading buffer is also known as Laemmli Buffer, named after the Swiss professor who invented it around 1970.

What is in the gels?
Tris-HCl, acrylamide, water, SDS, ammonium persulfate, and TEMED. Although the pH values are different, both the stacking and resolving layers of the gel contain these components. Tris and SDS are there for the reasons described above. Ammonium persulfate and TEMED work together to catalyze the polymerization of the acrylamide. The Cl- ions from the Tris-HCl work with the glycine ions in the stacking gel. Again, more to come on that.

What is in the gel that causes different sized protein molecules to move at different speeds?
Pore size. When polyacrylamide is combined in solution with TEMED and ammonium persulfate, it solidifies, effectively producing a web in the gel. It is through this web that the linearized proteins must move. When there is a higher percentage of acrylamide in the gel, there are smaller pores in the web. This makes it harder for the proteins to move through the gel. When there is a lower percentage, these pores are larger, and proteins can move through more easily.

WHAT are there two layers in the gel?
The stacking layer and the resolving layer. The top (stacking) layer has a lower percentage of acrylamide and a lower pH (6.8) than the bottom (resolving) layer, which has more acrylamide and a higher pH (8.8). SDS PAGE is run in a discontinuous buffer system. There is discontinuity not only between the gels (different pH values and acrylamide amounts), but also between the running buffer and the gel buffers. The running buffer has different ions and a different pH than the gels. 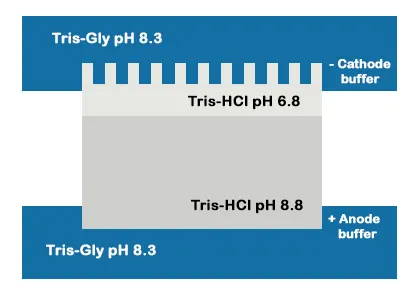 Wait – did you just sneeze?
Close. I said glycine is a zwitterion at pH 6.8 in the stacking buffer.

It’s All About the Glycine

So what’s up with glycine?
A lot. It is the key to the discontinuous buffer system. It is the ionic state of glycine that really allows the stacking buffer to do its thing. Glycine is an amino acid with the chemical formula NH2-CH2-COOH. The charge of its ion is dependent on the pH of the solution that it is in. In acidic environments, a greater percentage of glycine molecules become positively charged. At a neutral pH of around 7, the ion is uncharged (a zwitterion), having both a positive charge and a negative charge. At higher pHs, glycine becomes more negatively charged.

What does glycine’s charge have to do with the stacking layer?
Everything. Glycine is in the running buffer, which is typically at a pH of 8.3. At this pH, glycine is predominately negatively charged, forming glycinate anions. When an electric field is applied, glycinate anions hit the pH 6.8 stacking buffer, and change to become mostly neutrally charged glycine zwitterions. That means they move slowly through the stacking layer toward the anode due to their lack of charge.

By contrast, the Cl- ions (from the Tris-HCl in the gel) move at a faster rate towards the anode. When the Cl- and glycine zwitterions hit the loading wells with your protein samples, they create a narrow but steep voltage gradient in between the highly mobile Cl- ion front (leading ions) and the slower moving, more neutral glycine zwitterion front (trailing ions). The electromobilities of the proteins in your sample are somewhere in between these two extremes, and so your proteins are concentrated into this zone and herded through the stacking gel between the Cl- and glycine zwitterion fronts.

What happens to the proteins in the resolving layer?
They slow way down and start to separate. The proteins moved more easily through the stacking layer because of the low percentage of acrylamide. Now that they are starting into the resolving layer which has a higher percentage of acrylamide, they have to slow down. Also, without the voltage gradient from the Cl- and glycine zwitterion fronts, they can separate.

How does this all end?
Hopefully with beautifully tight bands separated by molecular weight. The different sized proteins run at different speeds through the gel, the big ones taking longer as they try to navigate the polyacrylamide web. The point at which they stop moving is dependent on when you turn off the power source. A good time to do this is usually when the dye-front running ahead of your protein samples (the blue line) reaches the very end of the gel. If you used the correct percentage of acrylamide, the molecular weight range of your protein of interest should be separated perfectly along the length of your gel!

Blog: 1% SDS is the buffer of choice for most western blots

Have another topic you'd like us to write about? Tell us!

What makes us different?