ImmunoChemistry Technologies has joined our family of companies. Learn More >

The sequence of the immunizing peptide is crucial to antibody specificity.

The rationale for the design of this peptide is as follows:

Truncated N-Terminal sequence: First, the peptide has a truncated N-terminal sequence. This was done to eliminate cross reactivity with homologous proteins that were identified in a Blast search.

Use of a Short Sequence: Second, another feature of the peptide design was the use of a very short sequence which forces the phosphoseryl residue into the epitope recognized by the antibody.

Amidation of the C-Terminus: Third, given the very favorable amphipathic character of the peptide, the C-terminus was amidated to better emulate the native tyrosine hydroxylase protein. Such modifications can improve immunoreactivity in western blots and especially in immunohistochemical applications.

Addition of an N-Terminal Cysteinyl Residue: Lastly, an N-terminal cysteinyl residue was added for conjugation to the carrier protein and coupling to the affinity column.

We will be with you through the entire process of making and testing your custom polyclonal antibody. 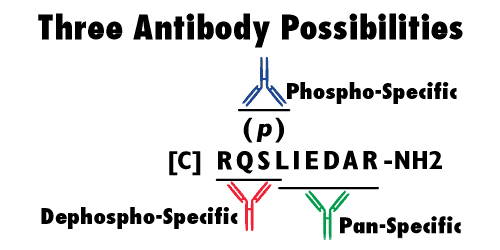 The only way to isolate the desired phosphospecific antibody is through sequential phospho and dephospho affinity chromatography. 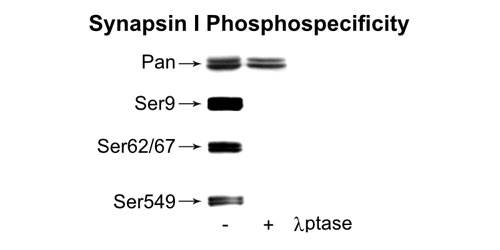 Western blots are essential to truly establish the specificity of an antibody for the holoprotein of interest.

What makes us different?